Young UTC Coder in the Limelight

A UTC Sheffield Olympic Legacy Park student has won a competition category in the city’s CODE>MAKE>WIN competition which celebrates the next generation of digital talent.

Jack Underwood, a computing student, has been recognised for his game development skills. He fought off tough competition to be awarded first prize in games design category for the age group 14-16. His virtual reality game ‘Age of Darkness’ blew the judges with its detail and complexity. 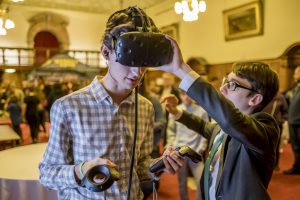 The annual competition for young coders, which is supported by Sheffield City Council and local employers from the digital sector, is now in its third year. It attracted ideas for games and apps as well as coded products, generating 11 winners across 5 categories.

The competition culminated in an awards ceremony at Sheffield Town Hall on Wednesday 24th October. The audience included a number of young people from across Europe visiting Sheffield for a three-day ‘Make Learn Share Europe’ digital skills event, collaborating with students from Sheffield schools.

Earlier in the day the students from Europe had enjoyed a busy day coding robots at UTC Sheffield Olympic Legacy Park.

Keynote presenter at the awards was Ian Livingstone CBE, the founder of Games Workshop and Non-executive Director of Sheffield-based Sumo Group PLC. Ian is one of the biggest names in the UK games industry and spoke passionately about the value of games to society, with over 2.2 billion people world-wide using games not just for fun but for learning.

He said: “Parents in particular need to understand that the UK games industry is worth over £1.5 billion to GDP and offers great job opportunities in software engineering, design and digital animation which are highly paid and highly skilled.”

He added: “Games are a brilliant combination of story-telling with art, technology, science, and creativity. It’s actually very difficult to make a game, so we need to make sure that children learn to code at a very early age and to understand that it’s not just about making boring databases for banks but it’s about making really brilliant creative content for us all to enjoy.”

He concluded by addressing the young people in the audience: “You are the digital entrepreneurs of the future. It’s great that you’re moving from consumption to creativity. If you have an entrepreneurial mindset, have your digital making skills, understand that failure is not a problem, it’s just part of the learning process, you can succeed and move from being a job seeker to being a job maker. I wish you all the best on your journeys.”

For his efforts Jack was awarded both a cash prize and a collection of tech provided by Pimoroni. He will also have the opportunity to visit leading games company Sumo Digital.