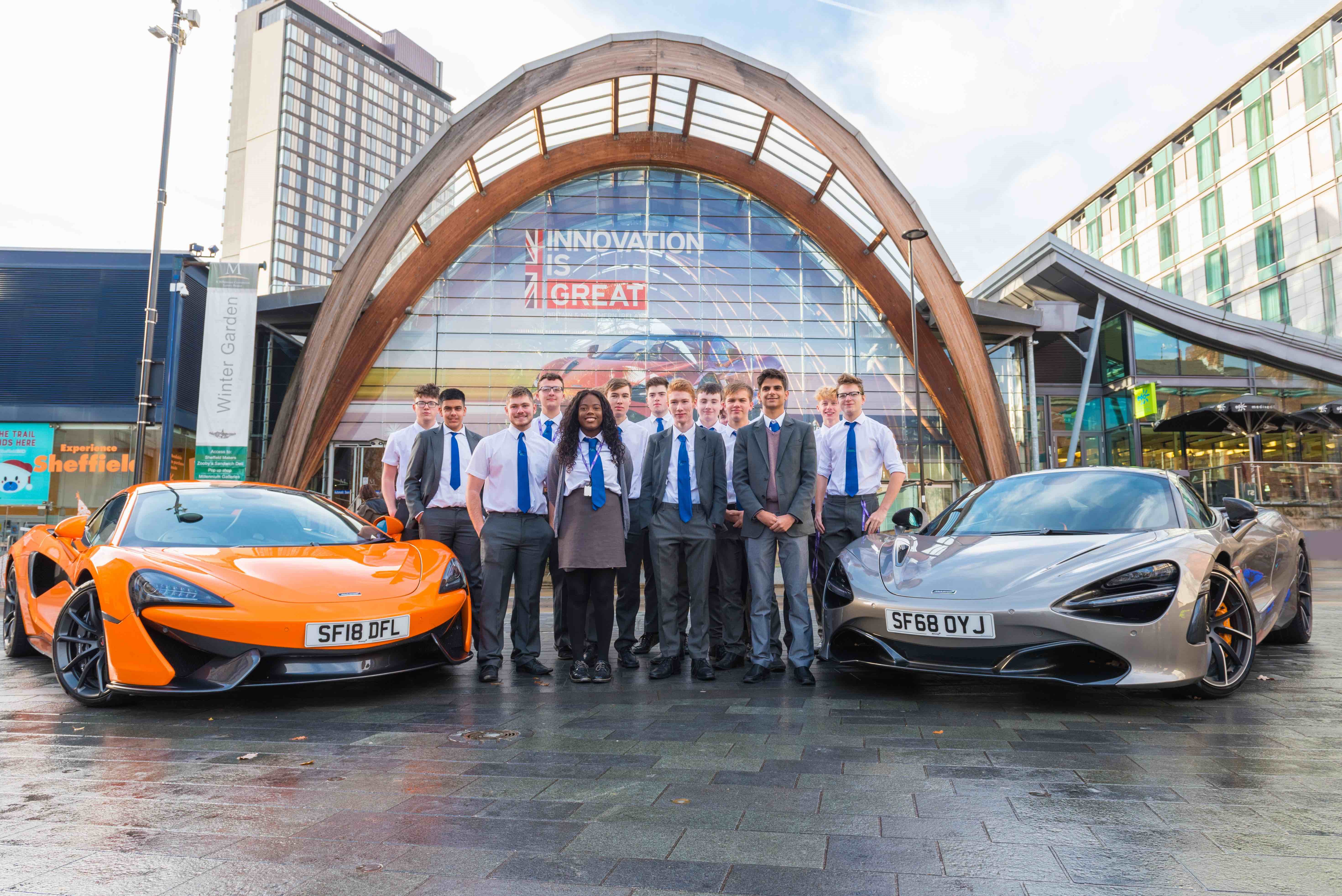 The £50m innovation and manufacturing facility, on the border of Sheffield and Rotherham at the heart of the Advanced Manufacturing Park, aims to become a world-leader in lightweight carbon fibre and composites technology.

It was officially opened today by the Duke and Duchess of Cambridge, and the Crown Prince of Bahrain, at an event attended by high-profile figures from across Sheffield City Region and the North.

Some of McLaren’s latest sports cars and supercars were also in Tudor Square in Sheffield city centre today thanks to local retailer McLaren Leeds allowing members of the public – including a group of UTC Sheffield engineering students – the opportunity to see the vehicles up close, while also learning more about the facility opening just a few miles away.

Alex Reynolds, Principal of UTC Sheffield City Centre, said: “We equip our students with the qualifications and high quality technical skills that employers need. It’s very exciting for our students and the city that a world leading engineering employer is opening a new centre in our region.”

After completing proto-typing, the facility will build McLaren’s lightweight carbon fibre chassis for its new road models from 2020, creating more than 200 jobs and providing an estimated £100 million of GVA (gross value added) benefit to the local economy by 2028.

Sheffield City Region made a financial investment into the project, while partners including the University of Sheffield, Sheffield City Council and Rotherham Council have worked closely with McLaren throughout the process.

Dan Jarvis, Mayor of the Sheffield City Region, said: “We know that our region is world-leading in advanced manufacturing and engineering. Investments from companies such as Siemens, Rolls Royce and Boeing are testament to our growing international reputation for excellence.

“So it’s great to see McLaren Automotive also opening here, demonstrating further confidence in our strong manufacturing heritage, confidence in our workforce’s ability to deliver, and confidence in the cutting-edge collaborations between university and business that enable us to lead the world.

“McLaren will also be a key part of our  ‘Global Innovation Corridor’, creating a connected set of research and business interactions based on our advanced manufacturing and engineering strengths. The opportunities for our communities, for businesses, for researchers and for the workforce of the future are limitless. Today marks a hugely significant moment for South Yorkshire, the wider Northern Powerhouse, and indeed for the UK.”

Mike Flewitt, Chief Executive Officer at McLaren Automotive, praised the Sheffield City Region’s expertise in advanced manufacturing, saying: “It was an honour for myself and all of the 2,300 people at McLaren Automotive to host The Duke and Duchess of Cambridge and His Royal Highness Prince Salman Bin Hamad Al Khalifa, the Crown Prince of The Kingdom of Bahrain, to officially open the MCTC and to show them the process we are innovating for the production of carbon fibre. They met some of the extraordinary, creative and passionate people we already have working here who are making that ambition a reality.

“It is an important milestone for us as a ground-breaking, innovative car company and allows us to tap into the great energy, vitality and skills this part of the world has to offer. What goes on here at the MCTC will be vital for our ability to make good on our intention to continue to develop and unveil cars that are lightest in class; it is my belief that Britain – through facilities like this – can become a world leader in lightweight materials technology that will help create more efficient future vehicles.

“We are proud to be bringing new jobs to the Sheffield region which has a long association with advanced materials; first with steel and now a future to look forward to with carbon fibre innovation and production for McLaren.”

President and Vice-Chancellor of the University of Sheffield, Professor Koen Lamberts said: “This new centre is a cause for celebration for our region, the North of England and the UK as a whole.

“We are proud that McLaren was attracted to our region by the University of Sheffield’s Advanced Manufacturing Research Centre (AMRC)’s world-leading research, our investments in facilities and our established partnerships with industry. Just yards away from McLaren’s new centre we also have the AMRC Training Centre, which is training McLaren’s first degree apprentices in the Sheffield City Region.

“Offering these specialised apprenticeships is helping to ensure that our region has the right skills and knowledge to drive the manufacturing workforce of the future.”

Keith Ridgway, Executive Dean of the University of Sheffield’s AMRC, said: “It’s great to see McLaren Automotive bringing the production of their supercar bodies to Britain; and even better that they chose to do it here in the Sheffield City Region. The AMRC’s expertise in composites and lightweighting was a critical factor in this great British car maker’s decision to locate their own state-of-the-art factory here in Rotherham.

“Our partnership with McLaren will help develop synergies between future powertrain development and the clever use of lighter materials to save weight and reduce the energy needed to power them. If the UK is to win the weight race, industry and government and universities must continue to work closely to ensure we make the most of what Composites UK estimate to be a £12 billion market by 2030. That’s why we continue to invest significantly in our lightweighting capability.”

Julie Dore, Leader of Sheffield City Council, said: “The McLaren brand is renowned for innovation, performance and for being at the cutting edge of technology. It is entirely fitting that they have chosen to base the new Composites Technology Centre at the heart of the UK’s Advanced Manufacturing Innovation District.