There is a Staff Training Day this Friday, 14 February, therefore no students are expected to be in school. Students will return after half term on Monday 24 February 2020. 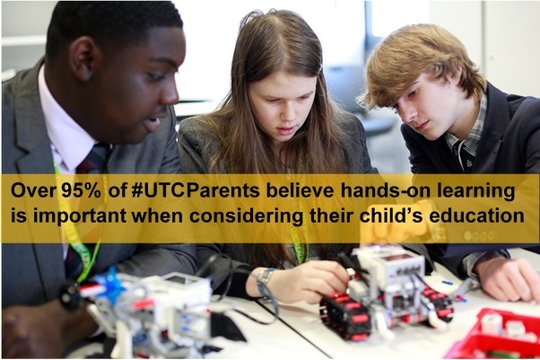 Parents’ Job Fears For Their Children

New research released today, Thursday October 8th, by Baker Dearing Educational Trust shows that for two thirds (66%) of parents, biggest fear is that their child will not find a job when they leave education.

Nearly half (48.1%) of parents said they felt stressed about their child’s education and 80% of parents believed the education system needed to change to reflect 21st century working Britain.

UTCs are state funded specialist technical schools for 14 to 19-year-olds where employers are heavily involved in the curriculum, training the next generation of Britain’s creatives, scientists, engineers and technicians. Students complete traditional academic qualifications including GCSEs and A Levels in addition to a technical one.

Nick Crew, Executive Principal, UTC Sheffield, said: “UTC Sheffield provides strong job prospects for young people in sectors where there are regional skills gaps. Employers are closely involved in our curriculum. They give students the opportunity to participate in real-life projects, so they gain experience of work and develop the professional and technical skills to go on to a career or higher education.”

UTC Sheffield was the first UTC to open in Yorkshire and the Humber, and launched in September 2013. It specialises in two sectors where there are regional opportunities for business growth. They are the advanced engineering and manufacturing, and creative and digital industries.

A second UTC is opening in Sheffield in September 2016 at the Olympic Legacy Park, and it will specialise in human sciences and computing. Parents wanting to know more about UTC Sheffield are invited to attend a showcase event on October 21st. Go to https://www.utcsheffield.org.uk/ or call 0114 2603970.

The national research reveals that parents who have children studying at UTCs feel more positive about their children’s prospects. Three quarters (70%) said the UTC has made their child more confident in getting a job.

It shows that 85% of parents believed the UTC was preparing their child for the world of work. This figure dropped to just 68% when the same question was asked of parents with children at mainstream schools.

Added to this, three quarters (75.86%) of UTC parents believed their child knew what industry they want to work in compared with just half (53.8%) of parents with children in mainstream schools.

The research showed that parents recognised the need for a more balanced education approach with three quarters (74.9%) saying their children should have the option of a combined technical and academic education at 14.

But parents are confused about the options available to children. Although more than half (55.30%) of parents with children in mainstream schools felt well informed about academies, only 2 in 5 parents (41%) felt informed about University Technical Colleges. However, when UTCs were explained to them 86% of parents said they might consider a UTC for their child if there was one available in their area.

Lord Baker, Chairman of Baker Dearing Educational Trust, the charity behind UTCs, said: “These findings highlight the importance parents place on their children’s education and whether it gives them the qualifications and experience they need to secure a job. Although it’s early days, UTCs are playing an important role to ensure children get the education they need for the 21st century workplace. This is valued a great deal by parents and I’m delighted that so many would consider a UTC education for their children.”

Dr Kathy Weston, Director of Keystone Aspire and researcher in the area of parental engagement, said: “The effect of parental support over a child’s school life is greatly underestimated. Parents are attuned to their children’s needs, understand their strengths, talents and interests and want the best for them. Setting aside time to talk about career aspirations and education options in a relaxed environment is hugely beneficial.”

Peter Glover, Senior Manager at the UK Commission for Employment and Skills (UKCES), said: “The youth unemployment rate is still much higher than the adult rate, and unemployment whilst young can seriously harm a young person’s future career.

“There are many jobs that offer positive career prospects for young people.  Our Careers of the Future report highlighted opportunities in science, engineering and information technology, as well as in health and care, the education sector and construction, to name just a few examples. Young people need to consider how the available opportunities marry up with their own interests and abilities.”